MediaMath Goes To The SOURCE, With CEO Joe Zawadzki 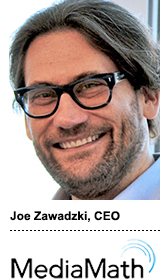 MediaMath has finished phase one of its SOURCE product – AKA “the industry’s first fully-transparent supply chain,” in the words of CEO Joe Zawadzki.

To assemble SOURCE, MediaMath obtained buy-in from a large group of SSPs, publishers, brand safety vendors, identity providers and others to help buyers easily understand all the providers and costs associated with the operation of their programmatic campaigns.

“You can look at everyone that’s involved in the transaction,” Zawadzki says this week on the AdExchanger Talks podcast. “You know the price that they’re charging. You know the value they’re creating. That hasn’t existed in my 25-year career.”

With that level of control, marketers can more easily tune campaigns to drive their particular business goals, allowing the open programmatic ecosystem to more effectively match the scale and the simplicity offered by walled gardens.

Also in this episode: Zawadzki assesses industry progress toward an identity framework that can function in the aftermath of identity crackdowns from Apple and Google Chrome.

“The bridge from the third-party cookie to what’s next won’t be a single solution, certainly not in its evolution, and I’d argue not even in its end state, looking out 10-plus years,” he says. “Orchestrating on the buy side, as well as attribution, you’re going to have to select, stitch and scale across three to five solutions.”

Previous Article IRIS.TV Announces MediaMath as the First DSP to Utilize the IRIS_ID for Pre-bid Contextual Targeting on CTV and OLV